Victoria Peak › Getting there › From Disneyland

While not a traditional part of the Hong Kong itinerary, the Magic Kingdom has become one of the welcome attractions that many people visit while in HK. The second of the theme parks in Hong Kong, after the Ocean Park, it is located outside the city area on the island of Lantau.

The largest if Hong Kong's many outlying islands the island of Lantau is actually not only the biggest, larger even than Hong Kong island itself but it holds a wide variety of different attractions, and destinations. From the traditional fishing village of Tai O, to the magnificent outside statue known as the Big Buddha, and even Hong Kong's International Airport.

The various areas if the island are not well connected together though, as the high mountains in the centre make road links problematic and most transport is therefore around the coast. The area of Penny's Bay where Disneyland is located has its own transport routes that connected the land of the mouse to the rest of the city. Built and operated by the same MTR Corp that runs the rest of the rail transport in Hong Kong the lines to Disneyland include a final section which includes Disney-themed trains and stations.

Roads also run the full distance to Disneyland and there are bus services, and of course it is possible to drive or take a taxi though this is rarely done due to the distance.

Taking advantage of the excellent MTR services from the park, and combining them with iconic Peak Tram gives a great overall trip. The join between the two services is the regular public bus service which is safe, clean, fast and efficient.  This three legged trip involves some changes, but also great scenic views. 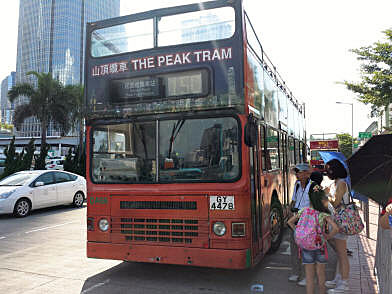 Taking this trip after Disneyland closes in the evening means seeing the city and the harbour at its illuminated best. The lights of the buildings around Victoria Harbour are seen up close on the bus, then the overall view is gradually revealed during the tram trip, culminating in the grand vista of that perfect clichéd yet irresistible night-time view from the Peak of the harbour.

Buses depart from Disneyland, at the large bus stop just outside the gates, and can take you to other types of public transport. None of them will take you all the way to Victoria Peak so some changing is unavoidable.