Victoria Peak › Getting there › From Central

Even though you can see The Peak from Central, at least in places through the maze of buildings, it doesn't equally follow that it is easy to reach from there.

Most visitors to Hong Kong, be they on an overnight stop, a week vacation or a 2 year posting, are going to spend some time in Central. Although it is the "business district" with Stock Exchange, banks and the like it is also geographically central, a hub of transport, and full of interesting little streets and shops. 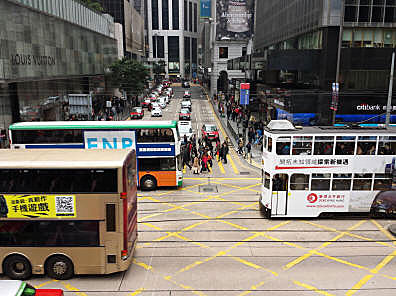 Whether shopping in The Lanes for cheap t-shirts, funky souvenirs or "Chinese" things to take home to Aunt Jane or eating in the various ethnic restaurants and bars in Lan Kwan Fong there is always something to do that brings people back to the district.

Though there are only a few obvious signs of the deep history of the area, tourists will find it rewarding to follow the Central Heritage Trail which gives some hints of how the area must have been at the height of Colonial times.

For the visitor to Hong Kong one of the big advantages of Central is that the large expatriate worker community there, often bankers and financiers, who speak only English mean that all the shopkeepers and waiters etc are quite familiar with doing business in English.  So this is the place to go into an otherwise very "local" looking cafe, street stall or bar and know that they will be able to handle orders in English!

Getting to The Peak from Central can be done by various routes, sadly though the rickshaws no longer ply the road, but you have options including the iconic Peak Tram, which is actually a funicular, public busses, and of course the ever present red Taxi.

Walking is not a good choice unless you are doing it for the hike itself, it is very steep and though there are good views at a few points for the most part you see only the backs of tall buildings and, higher up the hill, the underside of trees.  Hiking up from Pok Fu Lam or Aberdeen, however, is more interesting.

Although the Peak Tram was originally built, over 100 years ago, to solve this very problem of how to get to Victoria Peak from Central when Rickshaws found it very hard going, it isn't a great option from a convenience point of view.  The Lower Peak Tram Terminus is not in Central itself, and is hard to get to.  Nevertheless, the ride is so much a part of a trip to The Peak that it has to be the first choice, unless you've done it before in which case take the bus.

Buses go all the way from Central, either the Piers or Exchange Square to the Peak Tower, which while not quite the top is good enough as a place to start exploring Victoria Peak.

As well as the obvious convenience of private transport, a big advantage of a taxi to The Peak as that you need not stop at the shopping arcades, but if you wish can ask the driver to go all the way up to the highest point. And save your leg power for walking downhill instead!

Ask the driver for Victoria Peak Garden, on Mount Austin Road, and show it on the map so the driver takes you all the way to the car park beside the lookout point.  (山頂公園)

When you arrive in the car park of the garden you can see the concrete viewing pavilion which looks like this: 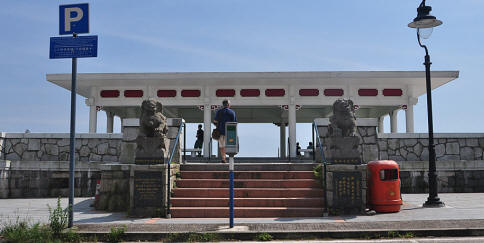 Once you alight from the Taxi it is worth continuing up on the footpath for another 5 minutes to the top of Mount Austin Road where there is a rough grassy lawn just under the radio towers which has great views over both sides of Hong Kong Island.

Green minibus # 1 goes from Central all the way to the Peak Tower, the fare is HK$10.20 per adult but with no child discounts as with all minbuses.  You are guaranteed a seat for your fare though, there are no standing passengers of minbuses.

Catch the bus at the back, or seaward side, of IFC Mall.  Or as it goes along Man Yiu Street towards the centre of Central.  It also stops outside the City Hall on Connaught Road which is a good place to get on board.

The route is rather long as it stops at several places on the way, including Matilda Hospital which is really off the direct path, which is why this is not a recommended route unless you really want to see some more different parts of the mid-level and the Peak on the way.