Victoria Peak › Getting there › From Causeway Bay

The Causeway Bay district, sometimes known as CWB, is on one of the premier shopping and entertainment districts of Hong Kong. Located between Wanchai to the west and Happy Valley it sits on Victoria Harbour and extends to the foothills of the island.

Visited mostly for the shopping and dining experiences it is not a tourist district as such, but does have several points of interest to the visitor to Hong Kong.  Here you will find the Noon Day Gun made famous by the Noel Coward song, and yes they do still fire it every day at noon. Victoria Park is one of the green lungs of the city, and without any particular fanfare  you will find here the statue of Queen Victoria after which it is named. 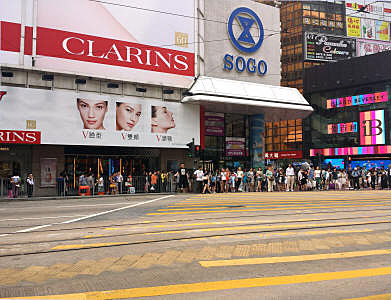 Between the high-rise shopping malls such as Times Square and the iconic department store SOGO outside which so many people have met their friends, there are a maze of small streets with both chain and independent stores. The Island Beverly offers a taste of local fashion designer, while the Apple Mall offers quirky interior design items and is not related to the Apple Store which is nearby.

Street markets such as Jardine's Crescent offer a glimpse of discount street shopping, while the two Wet Markets, one at the end of Jardine's Crescent and the other behind Times Square, let the visitor see how locals in Hong Kong do their fresh food shopping.

Above street level, in the commercial office blocks that tower above everything in Hong Kong, there are also discount outlets for watches, fashion and jewelry. And for all of these reasons the roads are packed every weekend, and most evenings, with busy shoppers and those going to and from the many eateries which constantly change but always provide many options.

There are several hotels within Causeway Bay, from the very new Crown Plaza through to the venerable Excelsior, managed by the famous Mandarin Oriental group and offering the same excellent standard of service at a slightly more affordable level.  If you have been shopping in the district or dining there and now want to go to Victoria Peak there are a number of options.

Don't miss out on the Peak Tram, the funicular that goes up the side of Victoria Peak and is a historic attraction more than 100 years old. The lower terminus is not in Causeway Bay, but is an easy bus ride away.

Option 2 - Bus all the way on Sundays

On Sundays only, there is a bus that runs all the way.

Catch the 15 B outside Hysan Place, Hennessy Road

The bus runs directly to the Peak Tower

It is close enough that taking one of the famed Red Taxi of Hong Kong is a great choice. Just catch a cab anywhere and tell the drive you want to go to Victoria Peak.

If you don't specify otherwise that means the taxi will take you to outside the Peak Tower, which is the upper terminus for the Peak Tram. There are observation points on the building, on the nearby walks, and in the Galleria shopping arcade across the square.

Or you can ask to be taken to the Victoria Peak Garden, which is a look out point higher up Mount Austin Road, with great views over the south side of HK Island.  It is then a short walk if you want to go as high as possible, which is not quite the summit as that is fenced off because of the radio towers.