Victoria Peak › Getting there › From Kowloon

The Peak, from Kowloon

Kowloon peninsula is the southern tip of the mainland in Hong Kong, jutting out into Victoria Harbour it houses some of the most built up places in the world, including Mongkok, as well as the shoppers paradise of the "Golden Mile" on Nathan Road.

Whether you are staying in a hotel in Tsim Sha Tsui East, visiting the museums, looking for details in street markets. Or simply come to explore the other-side of the harbour, every visitor to Hong Kong will spend some time in Kowloon.

Today the area seems very flat, but it is actually named after the 8 hills in the district. According to ledged a young prince said that there should be eight dragons, one for each hill, but his tutor corrected him and said 9 dragons as the prince was himself a dragon. Hence the area became known as Nine Dragons, or in the local languages "Gou Lung" which became corrupted to "Kowloon". 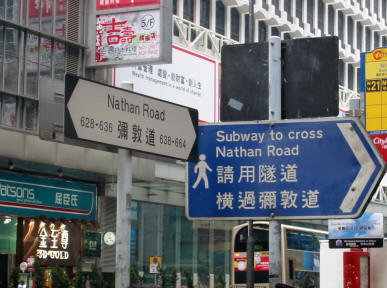 Bisected by the north-south avenue of Nathan Road the district is large, wide, and varied. Some areas are residential, others are commercial, many are mixed and the budget ranges from the lowest to the highest. Whether you want top-of-the-line branded goods, factory seconds, or cheap trinkets, they are all available within a few streets of one another.

While mostly built-up there are a few parks that form green lungs within Kowloon, the most well known of which is Kowloon Park itself.  With a range of activates from a hedge maze, a bird lake to an aviary and a statue garden the park is a quiet break from the activity of the city.

The most northern part of the peninsula, Kowloon Tong, is a plush residential area of low-rise villas and well provided with prestigious schools.  While the eastern extreme of Kowloon Bay has some light industry, and also the Kai Tak Cruise Terminal.

Well served by public transport, and dissected by a regular grid of streets, the district is easy to reach. And generally easy to walk, though there are some areas in Tsimshatsui were underground pedestrian subways form a bit of a maze that confuses even locals.

Getting to Victoria Peak from Kowloon means of course crossing Victoria Harbour, and as there are no pedestrian crossing this will mean a ferry or some transport through a tunnel.

The best options depend on where you start, if you are in Mongkok then follow our specific instructions for there.  Otherwise read down for some great choices.

From the Northern areas such as Kowloon Tong the transport options are little more restricted. As the distance is a little longer it's good to make use of the excellent Mass Transit Railway system, known to all as the MTR, which provides both underground and regular train services.

This route is long to describe, and will take about an hour to complete, but is fast through the built up city, using the MTR, and has the pleasant walk through the park to break it up. 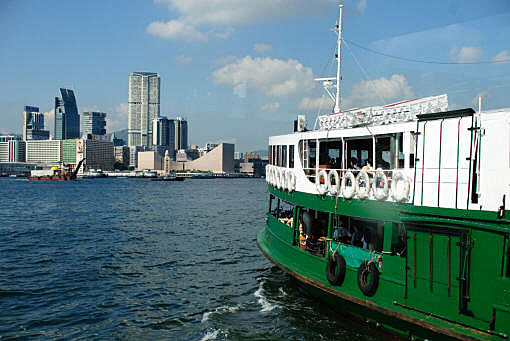 Already at the southern end of Kowloon? In Tsim Sha Tsui or on the lower part of Nathan Road? Then there is a great option available, via the iconic Star Ferry and using the cheap and excellent bus service.  This option is great if you want to see the sights as you go and turn the journey into an experience in itself.

If you take this route you will have missed out on the Peak Tram, consider taking the tram down later in the day to get that experience. It may have shorter queues as well as people leave the peak at all times and so the rush is spread out.

Arriving in Hong Kong at the Kai Tak Cruise Terminal? Then you'll be in Kowloon, but at the far eastern side known as Kowloon Bay. This is one of the more difficult parts of the district as far as transport is concerned, and making use of a taxi is a great option particularly if you are in a group.

Been to the modern yet historic styled Kowloon Walled City Park? It's a nice place to visit, but getting from there to Victoria Peak is best done by Bus

There are not many things of interest on the Western side of Kowloon, but perhaps you have been to the observation tower at ICC, or an event in the Western Kowloon Cultural district. From there it is best to use the MTR back to Central and then take a GMB or Green Minibus.

On Finance Street catch the #1 Green Minibus which goes all the way to Victoria Peak, stopping at the Peak Tower